This part discusses the potential causes of shoulder problems in this sporting group.

Tennis is a sport in which there is global participation. In many countries, tennis ranks among the most popular sports. In the Netherlands , for example, it is the top ranked most popular sport amongst the female population.

Of all chronic injuries in tennis, upper limb injuries are the most common and a significant number of these involve the shoulder.

The shoulder is at particular risk during tennis as the joint and surrounding muscles are subject to significant forces whilst playing. In terms of biomechanics, the tennis serve in particular, can be considered as being equivalent to a throwing action. Just as in throwing sports, the majority of injuries are thought to occur in the late cocking phase (when the racket is raised behind the head in maximum abduction and external rotation) and on the deceleration phase (on the follow through of the serve or throw). 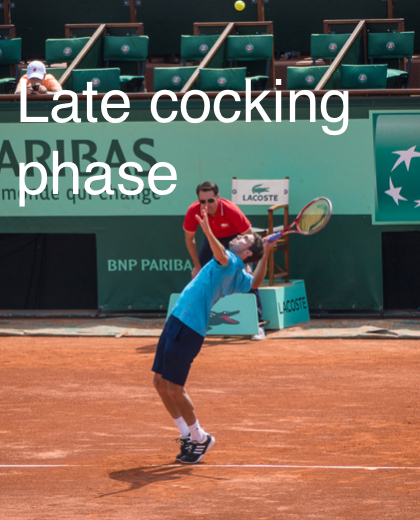 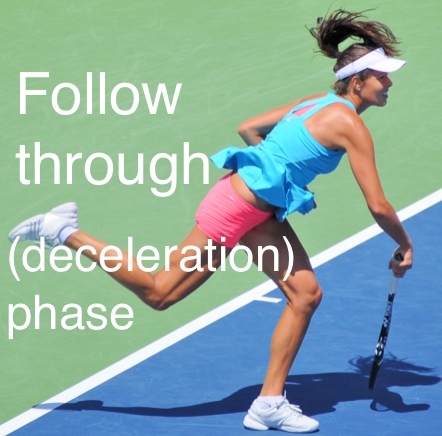 For example, peak activity of the rotator cuff can exceed normal physiological levels (up to 110% of Maximum Voluntary Isometric Contraction, or MVIC)
during this phase.

Effective and safe serving relies on a number of factors being optimised. These include-

An understanding of all the potential contributory aspects is necessary to properly assess and formulate a treatment strategy for the tennis player or throwing athlete with chronic shoulder pain. Such an understanding can also provide the basis for the design of preventative exercise programmes. It will be seen that the five factors mentioned above do not act in isolation, but are interdependent to a large degree.

The kinetic chain considers the body as a system of segments linked through the joints. In the tennis serve the kinetic chain involves the leg, hip, trunk, shoulder, elbow and wrist. All components of the kinetic chain need to be functioning well to optimise the transfer of energy from the leg to the racket. If any aspect of the chain is not functioning properly, undue stress and potentially injury can be caused to structures further up the chain. Thus the leg, hip and trunk function must be considered when dealing with potential shoulder issues. For example, thoracic spine stiffness and hyperkyphosis have been implicated in the development of shoulder problems.

There are a number of ways in which abnormal positioning and movement (scapular dyskinesia) can lead shoulder problems in throwing or serving. This is normally due to an imbalance of the muscles acting on the scapula. Firstly the scapula needs to be properly retracted and held against the chest wall in the cocking phase. This allows maximum energy generation, but also, as the serve progresses, can lead to injury if not adequately achieved. Serratus anterior and the trapezius balance are of particular importance in this function. With abnormal scapular protraction, the resultant hyperangulation between the humerus and scapula can lead to stretching and damage to the stabilising structures at the front of the shoulder (primarily the anterior inferior glenohumeral ligament). If there is a failure to elevate the scapula adequately in the middle phases of the throw (a function of  balanced upper and lower trapezius activity), there can be a functional reduction in the subacromial space, which can result in impingement and damage to the rotator cuff. A number of patterns of scapular dyskinesis have been described in detail by W B Kibler

Glenohumeral stability depends primarily on dynamic stabilisers through most of the range, whereas at the extremes of movement, the ligamentous structures are more important.
The dynamic stabilisers are mostly the rotator cuff, but overactivity of some of the other larger shoulder girdle muscles can have a negative effect.
The ligaments are essentially condensations or thickenings of the capsule of the glenohumeral joint capsule. Problems can arise if these capsular structures become stretched or tighten. A recognised pattern of such problems can result in so called internal impingement. In this condition, the capsular structures at the front of the shoulder become stretched and those at the back become tightened. This results in the centre of rotation of the  humeral head shifting upwards and backwards as the arm is raised for throwing or serving. This shift leads to the undersurface of the rotator cuff coming into abnormal contact with the superior labrum, with the potential for damage to both structures (internal impingement). Susceptibility to such problems may be suspected in the player who has increased external rotation but with more extensive loss of internal rotation (GIRD, or Glenohumeral Internal Rotation Deficit)

Competence of the capsular structures

The main restraints to glenohumeral motion at the extremes are the capsulo-labral complex. These structures are composed of the circumferential labrum and the thickenings of the capsule known as the glenohumeral ligaments. Different areas of the complex have varying importance, dependent on the position of the arm. The tension developed in the ligaments as the arm approaches an extreme of normal range is important to provide feedback to the brain which then activates the correct muscles to assist in stabilising the shoulder. Incompetence of the ligaments can impair this process. Equally, over-tightening or thickening of the ligaments can also cause issues, as mentioned above. A separation (traumatic) of the labrum from either the front back of the lower half of the glenoid is known as a Bankart lesion. Since the original description, a number of variations of labral injuries have been described e.g. ALPSA lesions, Perthes lesions etc., but they effectively amount to the same thing: an incompetence of the capsulo-labral complex predisposing to glenohumeral instability. Damage to the upper part of the labrum is of course known as a SLAP lesion. Although SLAP lesions are a fairly common pathology in overhead athletes, they do not result in instability issues. However, they may have an indirect association being one of the consequences of the potential anterior capsular incompetence and posterior stiffness seen in internal impingement.