Is this the future of diagnosis of joint problems?

There was a great deal of excitement at this year’s British Elbow and Shoulder Society meeting over a new diagnostic device which is becoming popular in the USA and will hopefully be available in the UK imminently. This device is known as mi-eye 2TM and is essentially a small arthroscope which can be used to assess joints such as the knee and shoulder in the clinic (office) environment. It is seen as an alternative to MRI scanning for the diagnosis of joint problems, and a number of potential advantages over MR have been proposed. 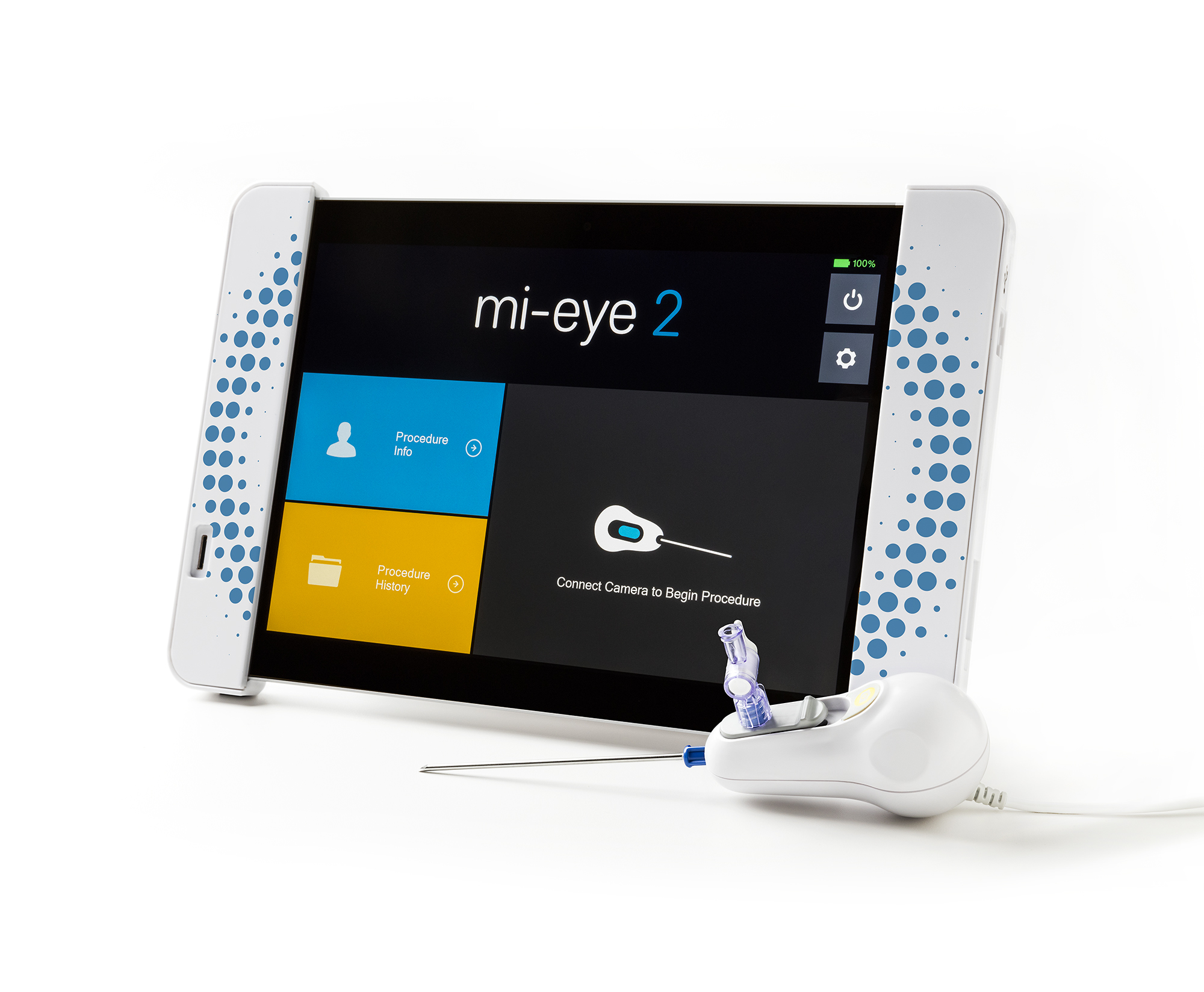 Clinic or office based arthroscopy is by no means a new idea1 but it has previously failed to become widely used. This is probably due the difficulties in transferring the type of required equipment (which closely mirrored that used in operating theatres) to the clinic environment. Pain control and potentially infection may also have been a concern due to the relatively large bore of the scopes.

Newer technology has allowed the development of a system for arthroscopy which requires minimal equipment and uses a small bore needle and digital optics which is thus far more suitable for use in the clinic environment than that which was previously available.

The mi-eye 2 system consists of a handheld 2.26mm arthroscope with an integrated camera and light source and a portal for injecting saline into the joint. The images are viewed via an HD tablet and both images and video can be captured. The field of view of the scope is 120 degrees and depth of field is 5 to 35 mm.

How is it used?

The principles for shoulder joint assessment are the same. The assessment can be done either with the patient sitting or in the lateral decubitus position. An additional spinal needle can be used to manipulate the tissues.

What are the potential applications ?

As an alternative to MRI, the obvious use of the mi-eye 2 system is in the assessment of the joint in a patient who is unable to have a conventional MRI assessment. This might include people with metalwork in the body, those with incompatible implanted medical devices such as a pacemaker or defibrillator as well as claustrophobic patients.

For the knee it could be used to assess for the presence of meniscal or cruciate ligament tears, articular cartilage deficits or for the assessment for suitability for procedures such as uni- compartmental arthroplasty or osteotomy.
Applications in the shoulder include the diagnosis of rotator cuff tears, labral lesions (instead of MRArthrography), biceps pathology and evaluation of bone loss in instability.

It could also be of use in patients with post-operative problems where MRI assessment may fail to provide reliable information. In the shoulder, examples may include the assessment of patency of a Bankart repair or the anterior portion of a supraspinatus repair.

There are potentially some advantages over MRI, even when MRI assessment is a viable option. The figure below shows the typical patient flow when comparing mi-eye 2 assessment to that of MRI

It can be seen that with mi-eye 2 assessment, the patient can be assessed immediately at their first appointment and treatment can be commenced at their second visit. This contrasts to MRI assessment where the patient may need to attend on a further two occasions before beginning treatment.

mi-eye 2 assessment may also be helpful in a patient who has had a previous MRI which does not explain on-going symptoms.

What are the potential concerns?

Inevitably, as with most new technologies and techniques, there may be some initial concerns with the use of the mi-eye 2 system:

There may be concern over the risk of infection when introducing a needle into the joint in a non theatre (operating room) environment. With adequate attention to sterility I do not believe this will be an issue, and the fact that we regularly inject steroid into joints in the clinic without infection problems should be reassuring.

Obtaining adequate analgesia may be a worry. However, having performed many full therapeutic knee arthroscopies under local anaesthetic alone in the past, I do not feel this will be a major issue. There is also some existing literature to suggest that the major complication rate from needle arthroscopy is small (0 to 1.2%) 2,3

Will the views obtained be of diagnostic quality? From the pictures I have seen thus far, the answer is ‘yes’. There is an, as yet unpublished, study from the US suggesting that for certain knee joint pathologies, mi-eye 2 is both more sensitive and specific than MRI, using full knee arthroscopy as the final arbiter of accuracy. Although there is no ability to change the viewing angle, the very wide angle lens should allow adequate visualisation of the important intra- articular features.

Will the subacromial space always be easily visualised?. I think, inevitably, the answer to this will sometimes be ‘no’. I base this on the fact that, on rare occasions, it is not possible to enter the bursa proper with a normal arthroscope without the need to perform a degree of debridement of the bursa.

Is the system likely to become popular in the UK Healthcare market?

I believe that there will be both common and individual arguments for and against the adoption of of the system when comparing the NHS and Private sectors. For the cash strapped NHS, relative cost will be a major factor as to whether this system is viable. There are a number of considerations when trying to arrive at an accurate cost comparison. Firstly the cost of the disposables which will include the mi-eye 2 scope, local anaesthetic, skin prep, needle and syringe, sterile field and dressings. The viewing tablet can be rented or can come under capital expenditure if bought outright. Added to that is surgeon and nursing assistant time. With busy, often overloaded, NHS clinics it may be difficult to be able to schedule efficiently, as the number of patients who may benefit from the system is unpredictable prior to seeing and assessing new patients in particular. It is clear that consenting for and performing in clinic arthroscopy is a more time consuming undertaking than ordering an MRI scan. Bringing patients back to a specific ‘scoping clinic’ would negate one of the big benefits of the system over MRI.

These costs would be compared to the fairly well defined cost of MRI (including technician, radiologist and reporting costs) added to the cost of a further post scan orthopaedic follow up appointment in the vast majority of cases. Comparative cost analysis has previously been undertaken in the US 4 but this analysis is clearly not directly transferable to the UK market.
Another potential advantage in those NHS Trusts who have a long wait for MRI would be in the time saved in the RTT pathway which would otherwise be consumed waiting for the investigation

In the Private sector, the economics will be determined in large part by the Medical Insurance companies. They again will want to see a cost benefit in much the same way as the NHS. Surgeons will also need to feel they are adequately remunerated for the time taken to perform the procedure, but one would hope that the potential benefits for the patient would be a more compelling driver for the clinicians. In a competitive market, the ability to offer a new technique will also inevitably be a driver for early uptake for some surgeons. There is in general, a little more flexibility, control and fewer resource constraints when scheduling private clinics and thus the factor of the added time needed to perform the arthroscopic assessment may be less of an issue in this environment.

In summary, mi-eye 2TM represents an advance in technology which should allow for safe, rapid and accurate diagnosis of intra-articular pathologies with some advantages over MRI scanning. At the very least it should provide a diagnostic tool which will be of great use where MRI scanning is not feasible. However, given the right price structure, I suspect that in many instances it may ultimately become preferential to MRI as a tool for diagnosing a number of types of suspected joint pathology.

All images used with the permission of Trice Medical, USA